Why Most New Year’s Resolutions Fail 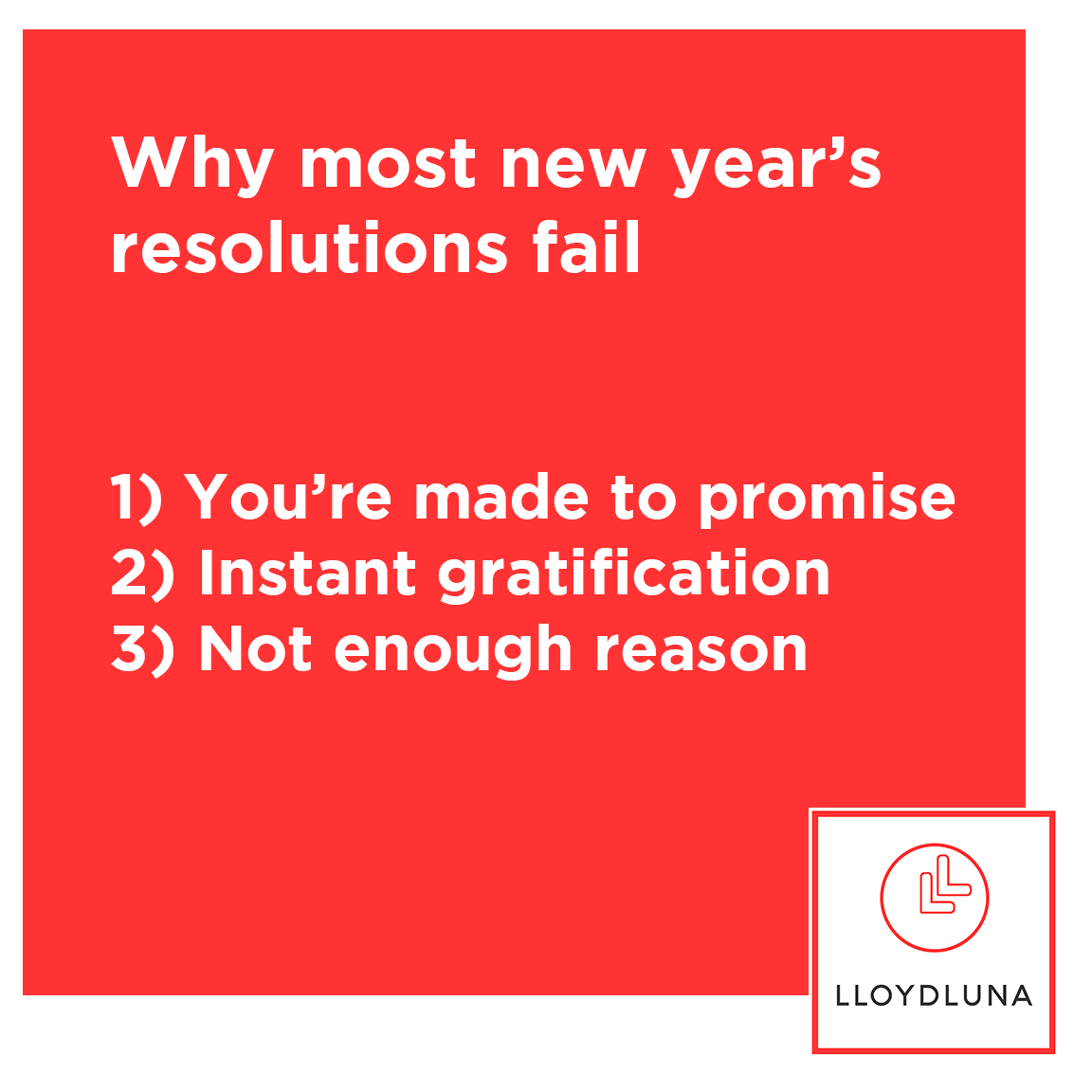 It’s 2016. Many are excited. Many are afraid. It’s like a replay of the same idea in 2014 before we met 2015. We have made some promises to our selves and commitment to the world. But what don’t they tell you about your new year’s resolution?

In my interview on Radyo5 92.3 NewsFM, I outlined some ideas, myths, and reasons why most new year’s resolutions fail. In the same program, I explained why many people forget about them, deliberately or otherwise.

Let me write down the reasons below:

You are made to promise.

Everybody else seems to do it. And it’s not cool to be left behind. When horizontally-challenged people say they want to lose weight this year, and you feel you are one of them or some judgmental and equally bored concerned people made you believe you are fat, you also want to lose weight.

Now, it becomes your resolution. But it’s not you who initiated it. The resolution didn’t come from you. It came from an outside pressure.

Are you going to lose weight because the world wants you to be “sexy” (as the men’s magazine defines it)?

Losing weight, being wiser in choosing a partner, saving money for the future, investing into something, making a better career decision, being more spiritual among many other promises must not be influenced primarily by your family, friends, neighbours.

If you are made to promise, chances are you won’t live up to that promise.

Fulfilling your resolution is more like planting a seed than cooking a pancit canton. You don’t plant today to harvest the next working day. Deal with it.

Going to the gym once or three times won’t give you some incredible result. Taking supplements may help a little but won’t do it either. Many people still believe in instant gratification. They want instant result. And when they don’t get immediate result, they quit.

I’m sure most people would promise to start a better financial life. Some so-called money experts call it “financial freedom.” So you promise to start saving some money or making investments, stop borrowing money, and spend only when needed.

In the next three months, you stopped borrowing, you start saving and make some investments. But the fourth month, otherwise known as summer, would tell you, your investment isn’t working, you are starving your self. It says, “Come on it’s summer. Have some fun. Spend on your vacation.

And now the savings is gone. You start to borrow money again. Pull back your investment. Back on the same old life.

The third and most important reason why most new resolutions fail is, yes, not enough reason.

The deeper the why, the easier the how becomes. When you don’t have a deeper reason for your new year’s resolution, you are better off without it because trust me, it won’t happen.

Every resolution should come with reason. As thinking creatures, we are trained to think, rationalize, justify, reason out.

Why do I have to experience the painful process of working out in the gym? Just to please the people who told me I am fat? Then, you will say, “I’m done. This is crazy.”

Why do I have to starve my self because I needed to save? I worked hard for this savings. I will spend it. Then, you will say, “I’m done saving. This is unfair.” There must me a reason why it called savings. Perhaps the purpose is to save you when you need it most.

Why do I have to read these books. They don’t give me any return. Then, you will say, “I’d better stop this. This isn’t going anywhere.” Seriously, when did you get the return since you first learn to recite your ABCs? The thing is, you won’t know when these pieces of wisdom would come in handy.

To recap, these are the realistic, philosophical reasons why most new year’s resolutions fail: (1) You are made to promise, (2) You want an instant gratification, and (3) You don’t have enough reason.