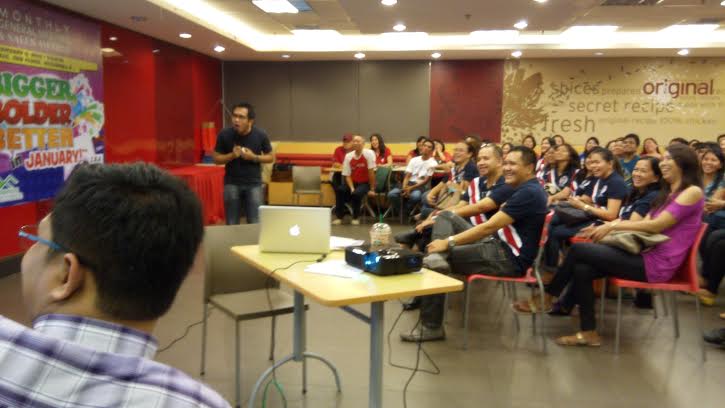 Speaking before about 200 sales people all working in the real estate industry is not new to me. I always feel at home when I speak to house sellers and real estate agents. Why? I don’t. I just feel at home.

Maybe it because this is my third straight year to speak on their opening sales gala and that means something for me. Besides, Green Circle owners said I am a bit of their lucky charm. The charm part, I am sure. The lucky, I am hopeful.

But this is my first speaking engagement in 2015. Last year, I finished with more than 90 speeches covering major cities in the Philippines (Manila, Baguio, Cebu, Davao) as well as other Asian countries.

In all fairness, Green Circle has been consistent at being Pro-friends’ leading sales company. Despite the many challenges they faced in 2014 including the highly publicized Pro-friends alleged inefficiency and poor customer service, they managed to perform so well.

So this year, my core message for their organization is to FORGET.

The problem with the new year or any new beginning at that, is the hangover. Like in any case of drinking as part of so-called celebration, too much of alcohol can make you dizzy and lazy the following day. In selling, this is pretty much the same. The achievement that we got last year often stay in the head and are carried over to the new year.

Not a good idea.

The reason it is called new year is because nothing in it should be old. So my advice, this year, forget what you achieved in 2014 but be mindful as to why and how you achieved them. Achievement is an effect. it is never a cause. Well, sometimes it causes as to feel invincible and indestructible. But really, you’ve made a lot of wrong and right decisions before you achieved something and you have to take note of those reasons and strategies.

However, there are two things that we all need to forget should we want to have a beginner’s mindset. This is important because most, if not all, successful people have this kind of mindset. The best thing about having a beginner’s mindset is you know you have nothing to lose in the first place so the tendency is to do everything you can and do some experiments in the process.

First, forget the things that make you sad.

Sadness has no place in the new year. It is one emotion that can eat your energy. It is a quick sand that can keep you from moving forward. Second, forget the things that make you feel you’re “god”.

Having achieved many things last year doesn’t mean you will have the same achievements this year. There’s always number two and the goal is to take your place. The burden is always on the forerunner rather than the second and third placer. Just like other normal human being, you are a mortal and mortals do die. You’ve only placed number one and that doesn’t make you a “god” so just the same, you are vulnerable to being dethroned. You will make mistakes and you will have the same challenges as anyone else.