Showing mercy and compassion to the President for his speech 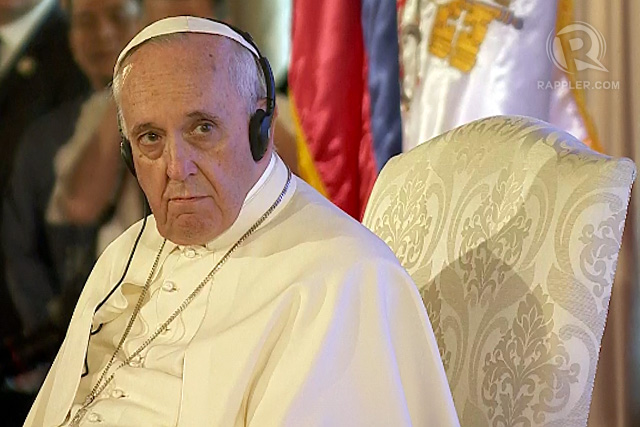 After hearing the speech of President Aquino in Malacanang as part of Pope Francis visit to the Philippines, I can’t help but nod and say, oh, this is the president I might know, this is really Pnoy—someone who used to making or someone or something look bad so he can look good if not better.

The basic thing about courtesy event such as this, welcoming the Pope inside your official residence, is that you will have to be as civil, sensitive and mature as you can in everything that you say or do.

Such June 16 President Aquino’s speech during the Papal Visit proved to be a “discourtesy call”. He seems to forget how to extend courtesy due to a leader or a visitor. In this case, his visitor is the leader of the world’s 1.2 billion Catholics.

For those who missed it, the President took on former presidents Marcos and Arroyo and how the Catholic church responded differently if not reasonably during the past and present administration. In essence, for example. he was trying to say that during the Arroyo administration, most bishops are silent about corruption but very vocal and critical during his term. That is outright criticism of the Pope’s organization.

The meeting of Pope Francis and President Aquino served as Aquino’s venue to tell the Bishop of Rome what his local leaders allegedly do here, which I guess is irrelevant if not totally out of context and unbecoming of a statesman and a highly popular leader.

You don’t invite and receive a visitor and tell him right to his face how bad things are going even if that is the case because there is a more appropriate venue for such criticism. Definitely not on this day.

Pope Francis came primarily for the people affected by super typhoon Yolanda. He is visiting in the spirit of mercy and compassion. He is here to get the message across.

And so if I were the president, the appropriate content of my speech should revolve on (1) what my government has done so far for Yolanda victims, yes, after more than one long year (2) how my “pro-poor” programs specifically the one dressed up as “conditional cash transfer” is able to “assist” the poor and (3) how transparent and honest my government has become since I was elected in 2010.

These talking points should have made his speech fit for the occasion.

Obviously, none of these was specifically mentioned in his speech.

Instead it was about Martial Law, Marcos, his father’s imprisonment, EDSA People Power, the bishops during the Arroyo presidency, Arroyo, the bishop who criticised his hair, the priests who went against his Reproductive Health program.

These are valid issues but were raised in an unnecessary time and inappropriate venue.

The thing is you don’t express your disappointments and dismay for the bishops or the priests or the religious in the face of their leader, worse, before the national and international media along with the diplomatic community. Your audience is the Pope. And he listens to you.

How is that for a part of a speech of a lifetime?

The Pope would probably be telling himself, “Talaga? Sinasabi mo ‘yan sa akin. Dito sa public event na ito? Hindi mo kayang ibulong na lang sa akin yan habang tayo ay naglalakad?” (Really? You are telling that to me in this particular time and venue? Can’t you just mention it to me later as we walk?)

The humble and kind and charismatic Papa Francesco, who is admired by Muslims and other people from various religious groups, doesn’t deserve this but it’s in the book now. It’s already a written history.

But I guess the Pope is compassionate and merciful enough to understand and forgive President Aquino. Perhaps, he even prayed for the president that he becomes more civil, more sensitive and more mature leader because obviously civility, sensitivity and maturity are not present in his welcome speech.

Or maybe, I should address this to the communications team in Malacanang particularly the president’s speechwriter. President’s Aquino’s Papal Visit speech is good and well-written but inappropriate and doesn’t fit the occasion.